The News-Gazette is running a series on Gun Violence: A Community Conversation.  As of February 28, 18 articles have been issued.  Each article highlights various conversations from the Community.  The genesis of these articles began in December with the open acknowledgement that Champaign-Urbana nears the top 2021 lists for homicides of 400 similar size communities.  Twenty-six lives lost, more than double the number in 2020.  Among them, a decorated Champaign police officer, and 13 victims under the age of 25.  Also, a record 350 confirmed incidents of shots fired.

2022 is not looking favorable.

Confirmed shootings are at more than two dozen.  Death by gun - four.  Without immediate intervention, this year will be worse than last.

Local entrepreneur Mike Namoff (Big Mike) thinks big. Last December, Mike, on his own initiative organized a successful party/fundraiser to raise money for the “Shop with a Cop” program.  Mike believes police officers across the country are taking an unfair hit in the midst of the national “defund the police” hysteria. Lack of municipal leadership has had a significant negative effect on local police officers.  This needs to change.  Namoff is thinking he may run for mayor of Champaign in 2023 to do something about it.

Mike’s most recent initiative is the “Love for Liam Fundraiser” held on April 3, 2 p.m. - 6 p.m. at The Venue, 51 E. Main St., Champaign. Last October, Liam Gasser, while driving, in the shopping district of north Champaign was intentionally shot.  This shot to the head resulted in significant debilitating spinal injury.  Currently in therapy, Liam is returning home from therapy. Both he and his mother need a lot of help. They are in need of a handicap van and an ADA accessible ramp.

As a concerned citizen, who wants to help, I decided to have a discussion with Mike Namoff, to obtain his perspective on Community Safety.  Below is the result of a “Question and Answer” session recently held with Big Mike and his brother Johnny. 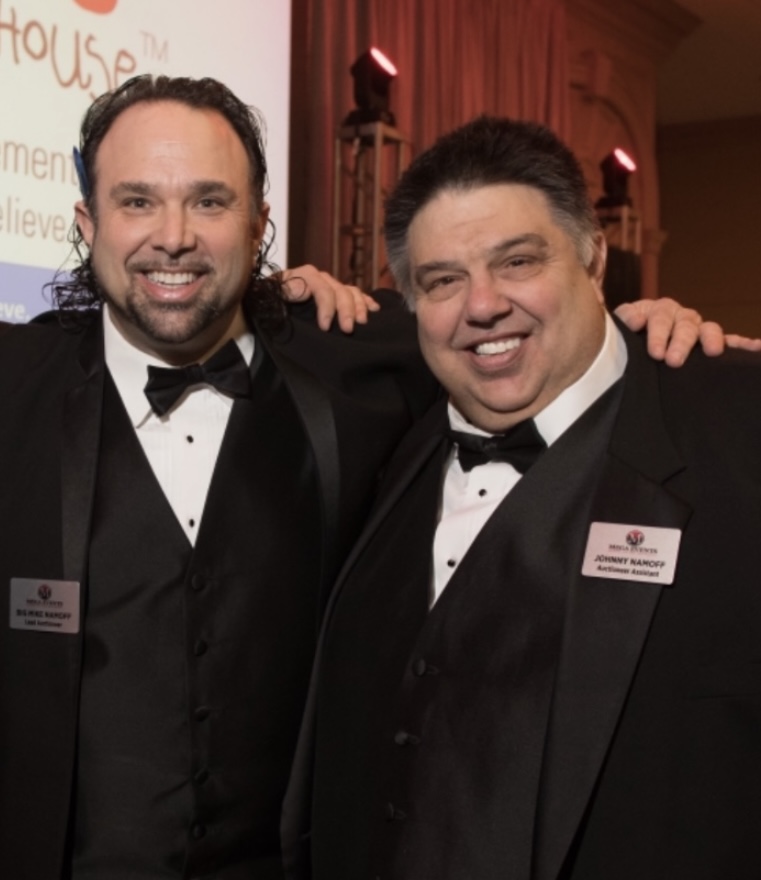 JW: “Hi Mike and Johnny, thank you for taking time out of your full schedule.

“Based on your involvement and survey regarding safety in our community, and your mission to promote and help implement a Community Safety Program, I would like to obtain your perspective on community safety and gun violence.”

Q: This year, 2022, is looking worse than last year’s already record gun violence incidents, what do you see as the cause?

MN: Last year there was only one City our size with a worse gun violence problem according to research by the News-Gazette.

Jeff, what I see is that there are a couple of items.

Number 1: Leadership.  There is an opportunity here for local leadership to step up.  Their lack of leadership has resulted in not filling the large gap in police officer staffing and limiting their ability to protect the community.  City officials are avoiding taking decisive action to keep our community safe.

I know with the right leadership and support and with us working together that our City can be much more vibrant and safe.

Number 2: Disregard for life:  Certain individuals have a clear disregard for human life, and the inability to settle disputes without violence.  For example, Liam was shot at because he honked his horn.  Now he is permanently disabled.  Kristian Phillpotts, while providing car ride services, was robbed, and killed by his passengers.  Brandon McClendon was shot and killed by his girlfriend.

Q: What do feel the mood is of those that keep our community safe?

MN: From what I see, our first responders, police, fire department, are extremely dedicated men and women who are committed to keeping our community safe.

However, because of ineffective leadership, staffing of the police and fire departments are dangerously low.  Workload has nearly quadrupled.  To make up the difference, officers and fire fighters are working excessive overtime to meet the desperate safety needs of our community.

I am just going by what I hear the officers telling me.  They need more training, more staffing, which can be helped with improved recruitment and retention.

Consider this scenario; a domestic disturbance that turns violent, someone is shot with life threatening wounds.  Because the City has not hired enough police officers, then most likely, the fire department will be first to the scene.  However, firefighters/rescuers have limited protective gear, and limited means to protect themselves, which means they must wait for the police to arrive to secure the area.

This can be corrected with the right leadership.

However, there are certain individuals that do not value life.  They are desensitized, having no respect for family, the rule of law, property, or safety.  As evidenced by what happened this year to Liam or Kristian, and so many others in our community.

There are so many wonderful people in Champaign County. Several serve in the community to make it a better place.  I would like to see those voted in to lead the community step up and do much better.

Q: What should be the consequences for those that commit gun violence?

MN: A straightforward answer is “do the crime – do the time”.  It is criminal to commit a crime with the use of a gun.  Much worse is killing.

Where is the justice for the family that just lost their child, their father, their mother, sister, or brother? Those individuals that take the life of another through gun violence must be prosecuted to the full extent of the law.  No plead downs to a lesser crime.

Violent gun offenders need to get the clear message “Not in This Town”.

Q:  What encouragement do you have for the Community?

MN: I would say, speak up.  Let your voices be heard.  Demand accountability. Demand safety.  Demand justice for victims. Continue to support those hurt by crime.

My hope is that this community would rise-up together as one voice and speak up.

For our first responders, thank you.  We need you.  Your community needs you.  Realize, the vast majority, of the community, appreciates you has your back.

Q: What do you recommend for City Government?

MN: There are many aspects.  It takes all of us.  The path we are on is not working!

City government needs to listen to the community.

I wonder, have council members gone and visited the citizens they represent?  Maybe they should do this.

There are several programs, but are they working?  Is there accountability? Is the money appropriately spent?  Do some programs need to stop? And new ones started?  I would expect that the city is tracking results, collecting data, and making informed decisions.

Questions like these need to be asked and answered.

Additionally, City leadership needs to Increase police and fire department staffing to the levels these departments need to keep our community safe.  City management needs to clearly listen to what the men and women who serve our community need to do their job.  They risk their lives for us to be safe.

Although the President, in his State of the Union address, declared we “fund the police”, Champaign leadership, in all appearance has practically defunded the police.

Consider this, In Champaign, the police officers are understaffed by over 20 officers, with only two in the pipeline, and we’ve been without a permanent Police Chief for some time, this looks like defunding the police.  It takes 9 to 12 months to train a new officer.  Even if City Management aggressively obtained new recruits, it would be a year or more before we could see the results.  At the current rate of obtaining new officers, it will take over 20 years to re-staff.

Champaign needs to over-hire police officers and firefighters. And provide all the equipment they need. I believe this City can be strong again.

I know that with the right leadership and support and with us working together, our City can be much more vibrant and safe.

Q:  What additional questions do you think need to be asked?

MN: Why is there a separation between leadership and the police?

Why can’t leadership support the police?

Why is City Management restricting the police from keeping our community safe?

Why is City Management not aggressively hiring police officers and creating an environment that supports them?